Practical and whimsical, this aromatic and salty blend can transform any dish, from a crème brûlée to scallops to… oatmeal??

Fleur del Sel (Flower of salts) retains its elegant French name because it is the Rolls Royce of salts. It is a vanilla salt that is ideal for certain level of A-List artistry when you use it on foods. It adds aromatic and flavor accents to foods that you might not think to use a touch salt on. The flower is in the aroma, and light vanilla taste, that gives a quick salty pop, or amps up another flavor in the food, then gently lulls your palette into vanilla happiness! 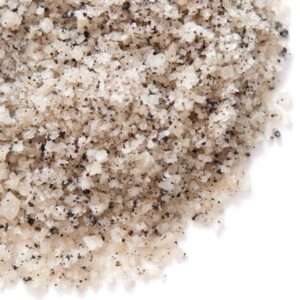 “Why salt, with vanilla?!” you ask, incredulously.

Pretty much any spice that you know works in the sweet world with sugar, works with salt. They’re both flavor enhancers.

Think of it like the amp attached to a guitar. However the guitar sounds, acoustic, or electric, it sounds clearer, and stronger with an amplifier.

Salt is an essential element of life. It helps cells move water in an out of them. It accelerates flavor, on your tongue, because it opens up access to your taste buds to the essential oils, and other flavorants in foods, that make them taste good.

Vanilla is an aromatic. When mixed with an alcohol, the alcohol extracts the essential oils into the liquid. Which is why we call that common preparation “Vanilla Extract.”   Added to sugar, another flavor accelerant, the sugar carries the vanilla to your tongue in a sweet-happy.

Vanilla salt, then, is a similar thing, but with a salty pop. The aroma of the essential oils is more free to hit your nose.

It’s used for DELICATE applications, as a light topping, mostly, to foods, or added to bar salt to rim a cocktail glass, or put a unique finish to the plating of a squash soup.

HOW IS IT MADE? 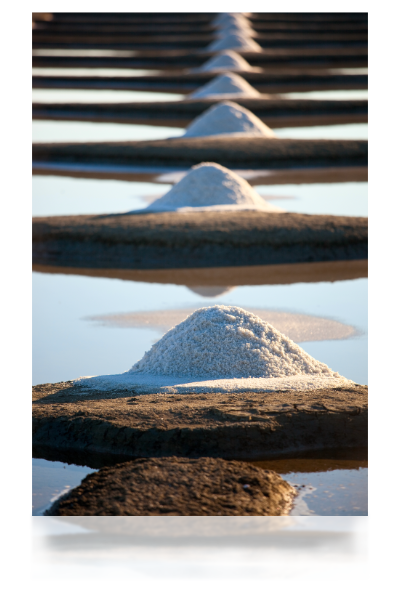 This is one of the most labor-intensive seasonings, right after the pistil picking of saffron:  Hand-harvested sea-salts from France, and hand pollenated, and picked vanilla beans.

Sea salt is hand-harvested in long, flat beds by slowly raking up the crystallized, dry bits. Vanilla beans are dried down to zero percent humidity, then ground into fine powder that is mixed with salt. Hand-harvested French sea salt, blends with crushed Tahitian vanilla beans.

Can you do this yourself, with some of Spice Jungle’s outstanding ground Tahitian vanilla bean, and a medium grain salt?  Sure. Air-tight container, filled nearly to the top, Toss in a couple of silica desiccant packets to remove oxygen and moisture from the remaining air, put in a dark cool dry place, like the back kitchen cabinet, for about 8-10 weeks, and you’re good to go.

If you haven’t risen to the level of Master of the Spice Dark Arts yet, though, or don’t have the time, or interest, to become a blender of your own concoctions, just purchase this finely-crafted blend!

Ground Tahitian vanilla beans, sourced from Tahiti, or French Guyana, with are combined salt from France.

A creation of the Bretons of France, combining the plentiful delicate sea salt, harvested from the shallow pools around the coast of Brittany, the climate and the slight difference in the salt content of the waters, blended with exotic vanilla, from far-flung ends of the French empire, Fleur de Sel became a professional chef’s coveted concoction to give their foods A+ game status. The “ooh” in ooh-la-la! (Oh that’s it!).