Perfect for foods with strong flavor profiles or richness, that need a touch of elegance, and contrast to other tastes. 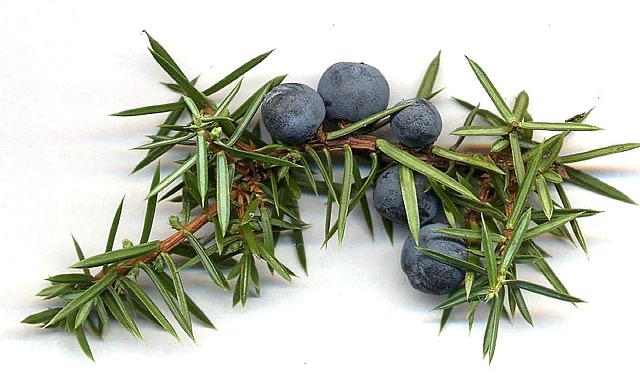 A juniper berry isn’t really a berry. It’s a female seed cone with, for a normally woody “cone,” heavily fleshy, and merged seed scales, that give it a berry-like appearance.  It’s a great contrasting spice for heavy meats, and seafoods with a strong flavor profile.

If you like gin, you know juniper. It’s a key botanical in gin’s flavor profile. Juniper’s flavor is a piney-sweet, and fresh, a touch peppery, with a clean, mildly citrus aroma that resets the palate like a breath of fresh forest air. The citrus-piney-aromatic flavor is a contrast: It offsets the fat-heaviness, or assertive flavor profiles of meats, and seafoods, and adds depth, like a milder cousin to crushed black pepper, in pickled vegetables, and sauces.

Like strong peppers, it should be used in MODERATION.  For pregnant/nursing women, and some health conditions see our HEALTH WARNING, below.

Juniper berries are native to the Northern hemisphere. The tree loves dry weather where the temperature drops into the teens. Due to over-harvesting, and global warming, it is a declining species, currently under protection, in the United Kingdom.

Pregnant women should not consume juniper berries, due to an increased risk of miscarriage, even in small doses. Historically, they were used as an ancient form of birth control.

Juniper berries are not recommended for people with diabetes, bleeding disorders or after surgery.

If you have allergies to juniper pollen, you should not consume it either. This is a very common allergy, or sensitivity, in areas where it grows. The pollen is very dense, and irritant in the Spring.

Juniper berries have been a staple spice for peoples ranging from the early Native Americans, on one continent, to the Norse, Germanic, and Eastern European peoples in the major continental plat of the Northern Hemisphere.

Gin might better be called “Jun,” in English. Gin is the shortening of the French cousin of it “genièvre” or the Dutch grandparent of gin, “jenever”  Both spirits name means exactly “juniper.”

European folklore weaves theories of planting juniper trees next to your home as a protection from evils during the witch trials. It was said that juniper beside the door to your home would prevent a witch from entering.