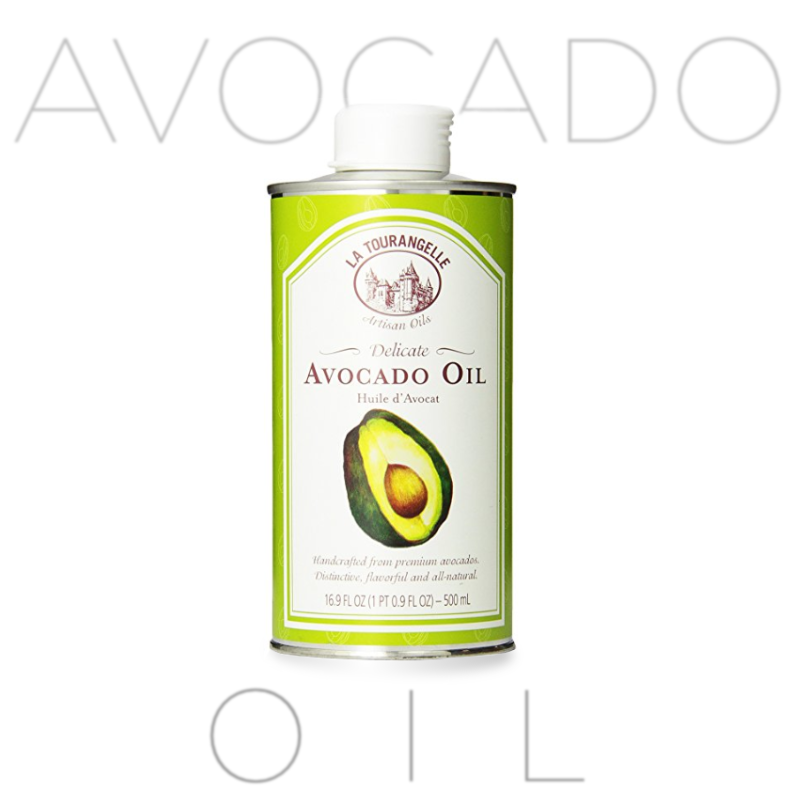 Avocado oil is a “fruit” oil as avocados are, well, fruit, like olives.

Its culinary use is the single biggest “discovery” in cooking fats in a generation that will revolutionize the way that you cook.

High in monounsaturates like olive oil,  Big Green’s cooking-grade oil can be safely purified to a 270°c / 520°F smoke point, without harmful chemicals, like volume “pure” canola, or processing using third pressings and rancid olives, as is often done with so-called “grilling” olive oil. First pressed avocado, not quite as hearty, still has an impressive 177°c/350°F smoke.

It has similar properties to olive oil, with no specific taste, which, for grilling and sauteéing when a neutral fat is needed, puts it over most fats other than rice bran oil, which has a slightly lower smoke point and a neutral taste.

With prices dropping on volume, it has become my go-to cooking oil.

I keep several oils in my pantry now, but, like you, I used many of the Vegoil Cartel’s biggest hits for years. A little of the “blend” of mystery vegetable oils, mostly the miracle canola oil, even though it had a pretty off taste when cooked, because allegedly it was better for you.

As is true with a lot of what we cook at home, I bought the brand that my grandmother and my mother both used. Family preference, marketing and shelf availability at the supermarket. Then I did some homework on them, and found out that cheaply-made large volume vegoil has a lot of downsides.

If you’re reading this, I’d guess you are on much of the same thousand-mile culinary journey. He’s what I found out.

ONE FRUIT. TWO GRADES OF OIL

There are two stripes of avocado oil, the first pressing, and the refined oil.

HOW IS AVOCADO OIL PROCESSED BETTER?

The extraction process in avocados is somewhat easier because it’s a big, soft fruit, unlike olives, and it doesn’t require a seed to be squeezed over and over again through chemical extraction., Many vegetable oils like “pure” canola or the mysterious “blends” of the VegOil cartel that are processed with gasoline derivatives like n-hexane to extract max oil out. There is a very small trace residue left in those oils, but, amazingly, no one in the industry or government seems to want to find out what the long-term effects of human consumption over years will do to you. First-pressed, some call extra-virgin, although that is an olive oil branding, avocado oil is cold-pressed from sun-ripened, hand-picked, avocados.

The skin and pit are stripped after washing.  it is malaxated (mashed and kneaded) at a low temperature to in tanks that minimize oxidization for a short period of time. It passes through centrifuges to separate pulp and water from oil. It passes through another fine filter to remove remaining large impurities.

Naturally Refined, HIGH-TEMP OIL – First-pressed avocado oil still has a lot of chlorophyll and triglycerides that make it bright green. It’s smoke point is lower. To create the Iron Tiger of oils, avocado oil that’s already been pressed and strained is passed through a very fine filter, usually diatomaceous earth and/or steam which naturally refines the oil. You lose the green, but you get a stable oil to very high temps that has neutral flavor and can be used in any cooking application.

WHY AVOCADO IS YOUR PRIMARY COOKING OIL

Why is it better than the vegetable cooking oil that you’re using now? Pretty much unlimited range. You could put filtered avocado oil, hypothetically, on a steak in a top home broiler and it would still be under its smoke point.

The refining of oils that you currently use, to increase their smoke point, ranges from less-than-ideal to mildly toxic.

The oil either loses a lot of its primary properties, or in the case of seed oils like canola, safflower and sunflower, many companies use n-hexane, a petroleum derivative also in your gasoline, of which trace amounts usually remain.

Blend oils that go by “vegetable” oil have had a number of downsides. A few still have hydrogenated or partially-hydrogenated oils, which are being phased out, but are still “legal” for a bit longer.

WHERE HAVE YOU BEEN ALL MY LIFE?

Avocados are a fruit that originated in Mexico, which is why they’re a bit late to the oil party.

The vegetable oil business as we know it today in America began with the importation of olive oils from Italy, corn oil production in the midwest, and peanut oil in the south.

Throughout North America, animal fats, mostly beef lard, were a large portion of cooking fats up until doctors started ringing alarm bells about the dangers of high animal fat diets in the 1960s.

In Mexico, where both lard and corn were plentiful, animal fats and corn fats were the dominant cooking products in the cuisine. There just wasn’t any particular need for avocado oil itself, although avocados as a fruit and their fats enjoy a venerated place in not only Mexican cuisine, but throughout the world.

For many years, avocados sold at a huge premium, because they were grown in such few places, and the groves took investments of time and patience to mature to the point where they bear quality fruit.

Like all gold rushes, the “green gold” rush ended in an overproduction of avocados for consumption. The producers started taking the avocados that weren’t market-grade, too small, then just too many, and finding other uses for them.

Avocados studied for their health properties had big upside in oils that worked for the cosmetic industry, and people in the massage game found avocado oil useful as a massage/skin beauty aid.

Whomever decided to start cooking with it: Thank you!