The seeds of your chocolate obsession have more uses, by far, than just a candy bar. Try an ounce. You’ll be back for more…

Cocoa nibs are cracked crunchy bits of heaven! Ready-to-eat, out of the package, they are good for recipes, as accompaniment to both spirits and coffee, or just as a snack on their own. Oh! Yeah! You can make chocolate with them, too.

Celebrated for their high levels of antioxidants, and flavonoids, they pack a lot of fiber, which gives you a sense of fullness. They’re a win whether you’re a raw foods fan, or love decadent desserts.

Cacao nibs have been used for thousands of years in cooking, and medicine, but only recently have they found much footing in the modern American and European kitchens, and bars.  Beyond grinding them into delicious chocolate, home chefs are rediscovering the nutty, bitter side of the bean’s other magic powers.

The flavor of a cocoa nib is more similar to roasted coffee beans than to chocolate. It is slightly nutty and, while there are definitely some chocolate notes in there, they drift into your palate after the coffee nose, but before the bean releases a hint of bitterness. They can be used in a wide variety of sweet, and savory applications in both the kitchen, and a home bar. They work really well as a contrast to something sweet. 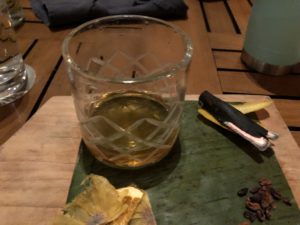 At Chao Pescao, at the Hotel Andaz, in Costa Rica, bartenders will serve up a neat 20, or 30, year-old rum on a plank topped with a banana leaf.

Atop that, the drink is in the center, and then, placed around it, are contrasts in flavor: A smoking cinnamon stick; dried sour orange; and a small pile of cocoa nibs.

You sample a bit of each to offset the heavy sweetness of the rum.

Cacao trees are native to the Amazon Basin, but they now grow in a land-range of about 20° North, to 20° South, of the Equator. Nearly 70% of the world’s supply of cacao is grown in West Africa. It’s one of the most vulnerable staple crops in the world due to global warming. In fifteen years, or less, production will have to shift to areas where temperatures will stay in the “ideal’ range for the trees that grow them.  Beans are also sourced from the Andes, the Amazon and Orinoco basins of South America, including Guatemala, Colombia, and Venezuela.

Chocolate begins with a careful cacao pod harvest. Because the pods grow in all degrees of ripeness and at any location of the tree. Harvesting is labor-intensive. It has to be done by hand, with machetes. The pods are then cracked open. The fleshy pulp is removed, and the seeds are left out to dry before they can be cracked into nib-sized pieces.

The cacao tree was domesticated more than 4,000 years ago by the Olmecs of Mexico who used it in religious ceremonies, and by Mocayas in Central America. Before that, it was consumed by pre-Columbian cultures along the Yucatán, including the Mayans. The Spanish found it to be another treasure of the “new” world, and exported it back to Spain, and then to the rest of the world.