The world’s most valuable spice has a few variations, based upon where it is grown. Greek saffron is a touch more bittersweet than its Spanish, or Iranian cousins. 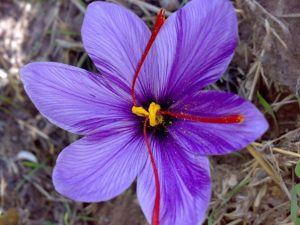 Saffron is wonderfully rare spice, because it is the dried pistils of the flower of crocus sativus, commonly known as the “saffron crocus.” Greek saffron is more bittersweet than other forms.

Saffron threads are hand-harvested, dried, and sold as fragile clusters of bright red “threads.” Naturally, one of saffron’s first uses, other than a flavoring agent, remains dyeing textiles. A single grain can color ten gallons of water with a yellow hue!

Greek saffron is generally earthier and a bit more bitter than other types of saffron, but the honey notes are also far more intense.

It’s highly aromatic: Musky; honeyed; floral. On its own, it’s a touch bitter, with a faintly metallic, or iodine finish. It’s the intoxicating perfume that draws people in. The penetratingly husky, earthy, flavor with notes of honey, and violet, seal the deal.

Native to southeast Asia and originally from the Persian Empire, saffron is a spice derived from the rare flower of the Crocus sativus plant stigmas.

Saffron is native to Persia (Iran), where it has grown since 10,000 BCE. In the late Bronze Age, on the island of Crete, a mutant form, with longer pistils, emerged, that is the modern saffron crocus harvested today.

A 7th-century BC Assyrian botanical reference has the first written mention of saffron. Over 4,000 years, saffron’s use and cultivation slowly spread throughout much of Eurasia, then North Africa, North America, and Oceania.

The Greeks picked up saffron from their travels, and from Phonecian traders. Saffron from Cilicia, on the Mediterranean coast of modern Turkey, was the most prized in the ancient world.

The “threads” high cost kept them out of common culinary use for a long time. Their uses were largely: Medicinal; the dying of garments; in foods, spa treatments and baths of the very rich; and ceremonial use.