One of the landmark books in home baking, Clayton’s curation of recipes, and adventures from all over the world, plus his ground-breaking global offerings of bread, and muffin recipes by hand, mixer, and food processor, continue to make it a must-have book for home chefs who want to explore baking

See the more in-depth review of this landmark book in baking here.

Bernard Clayton, Jr. toured the world, gathered together, and baked, extensively, some of the best recipes for breads in the world. This, along with James Beard’s landmark book on baking, should be on the shelf of every serious home chef. 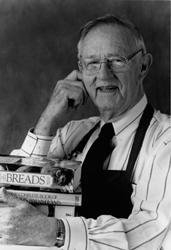 Bernard Clayton, Jr. was a journalist, adventurer, and self-taught master baker. A contemporary of James Beard, his work was equally revered, but did not wind up, when he passed, at the age of 94, in 2011, having a foundation set up in his name that awarded recognition, as Beard’s foundation did.

One of the great writers in the culinary world was slowly fading into obscurity.

His many books on baking, and the odd culinary, and soup adventure, were a latter-lifetime of adventures in the culinary arts, but most especially in baking. His books are a curation of not just great recipes, but the many people whose work in the kitchen he immortalized.

The Complete Book of Breads, from the first edition, in 1976, when it debuted, up to its final, thirtieth anniversary edition, was a ground-breaking work.

Clayton’s storytelling, as a lead in to the recipes, unique, then, in the cookbook game, added travel, and adventure.

His extensive prep of the baked goods that he gathered, from both top professional, and home, chefs, led him to make multiple variations on the preparation.

The majority of his recipes have instructions for:

His books were the amongst the first to embrace the Cuisinart, when it debuted.

I’ve been cooking with this book since the 1987 edition hit the shelves.  Read my review to get more of my take on this wonderful book.

The book  was revised several times, up to the 2006 edition. The hardback edition of the book has been out of print for a while, but the paperback is still printed.

A good used copy, though, is worth its weight in gold. You can get either the new paperback, or a used hardcopy from our friends at Amazon.  I give it a solid five diamonds.  A must-have for people who love to cook, travel, and share experiences!