IN FOUR BARS OR LESS…

Hervé This’ Molecular Gastronomy: Exploring the Science of Flavor is a landmark book in the culinary arts.  My “perfect eggs,” and many other revelations about how foods ‘are,’ that I have discovered, began with the science in this book.

This is a great storyteller, for a scientist, but, buyer beware: This transformative journey into the atoms and molecules of your food that puts the physics into pâté as big of an epiphany as it can be, is as dry a read as a poorly made Scottish scone.

EINSTEIN, WITHOUT THE BAGELS 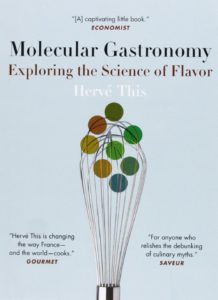 Hervé This is not this legendary innovator. Rather, he’s your wonky, nerdy French guide to the research, mostly in France, into the science of food that yields discoveries that can help you in your home kitchen as much as it benefits the big corporates who crank out boxed, and packaged, foods.

If you think about it, food, at the bottom line, is like everything else in the known universe: It is made up of atoms, that form molecules, that form the cells that become the bits of this and that that ultimately become the food that you cook. Thankfully, monsieur This is much more eloquent in his scientific narrative than I am.

So, if we can understand the raw materials, from the atom up, as it were, we should be able to push past the stuff that has largely been a mystery of whatever that grandma that did fundamentally worked because, well, grandma didn’t screw things up. Often, we “luck” into a recipe because we did everything right. Understanding the science removes that haphazard way of succeeding, and builds a lot of culinary confidence in your understanding of how to master a wide variety of foods.

Even if you’ve been cooking to the point that you’ve earned your granny merit badge, you can learn some transformative things about your cooking from this book.

Let’s take eggs. Most of the world eats them, and even the best grannies in the world overcook them. Professor This explains that 68°c / 154°F is the ideal point where heat allows the egg to cook without overcooking. It allows the egg’s proteins to cook into chains that lock in the steam, keeping the egg more moist, less rubbery, and lighter.  If your eggs come out so rubbery that you could bag them, and sell them at a novelty store next to the rubber chickens, then you need to heed this bit of science.

This is Professor This at his best. Some of his topics can be a very bone-dry read for those without their Ph.D in physics.

TAKING STOCK OF A BONE-DRY READ

The problem with the book is the language. No, not French, his native tongue. That probably would have helped. It’s the very clinical reporting of the work at this or that French research center that wanders off into that clubby space of readers who are already part of the “club.” Science geeking. If you loved chemistry in high school, he’s your kind of writer.

Thoughts on how vinegar evolves, or how heat affects the cellular structures of meat are both amazing and informative. His deep dives into small, nuanced aspects of the science, praising the scientists of this or that agency pushing on the borders of food science, can get really deeply into the weeds, and probably well above many readers’ interest level.

There are a couple of sections on using chemistry that, if you can figure out how to translate them into products available to you, help you understand flavor, and how the brain perceives it.

For those of us who translate that science into more teachable moments in home kitchens, if you can brave your way through the intellectual husks, the golden cooking knowledge within is invaluable.

So many authors, and chefs, pro and amateur, have “discovered” this book, and have explored outward into what has been dubbed molecular gastronomy.  While a slow read, the payoff, in terms of what you can do with your food, is well worth the page chew.

While it make the read a bit slower, as I have to put it down and read in small chunks, the things that I have learned from it have so transformed my understanding of what I cook, and of how to go about cooking it to honor the “stuff” from which it is made, I have to give it a big recommend.

I give it my five-diamond Choicestuff™ award. 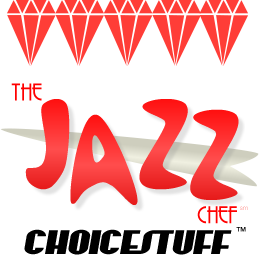