The Jazz Chef > Blog > Tools & Gear > Kitchen Tools > Whip It Good: The Wonder of the Whisk 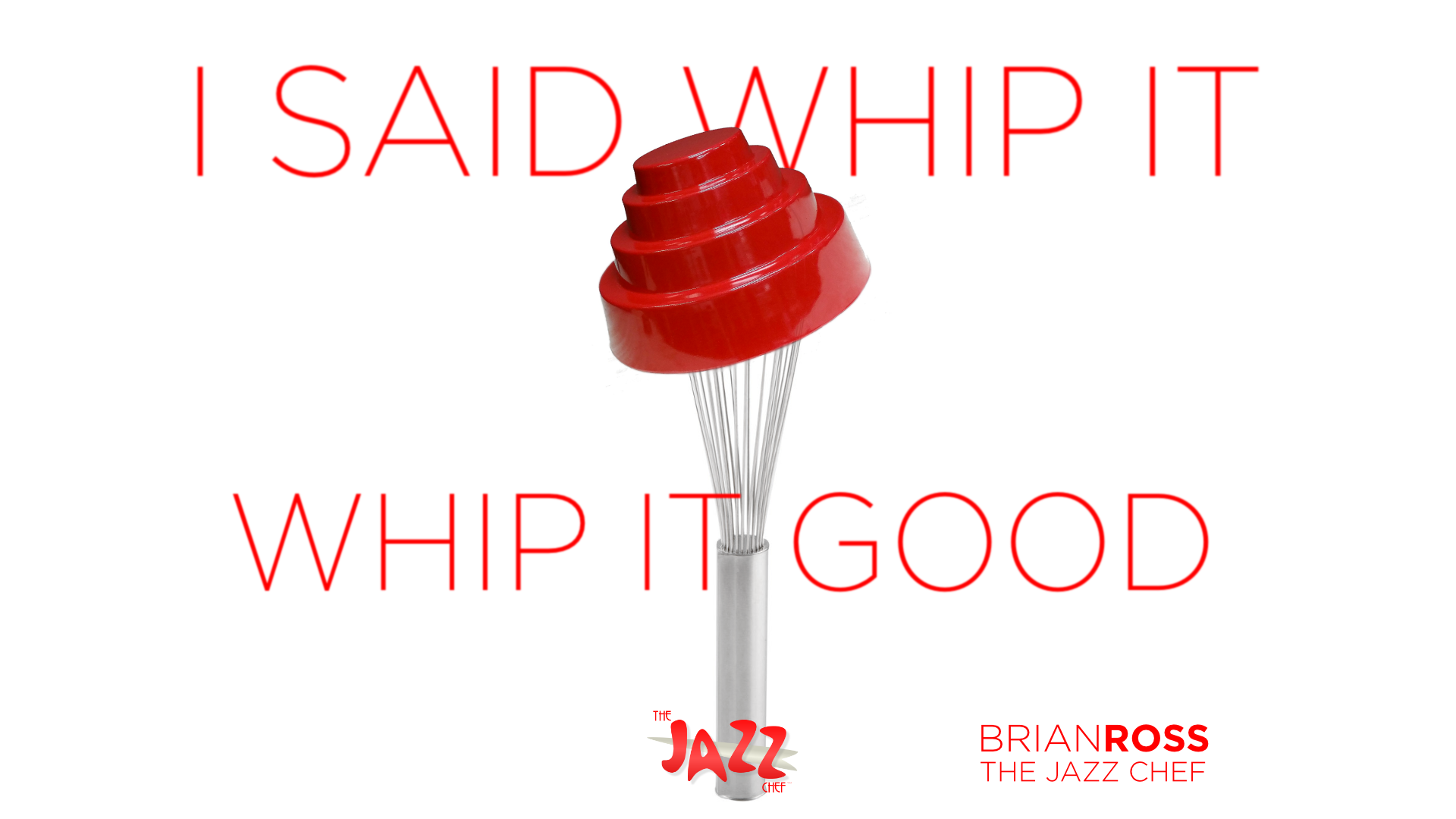 Whip It Good: The Wonder of the Whisk Most of y’all think whisks are no big whip. It’s that plastic, loopy thing everyone’s got in their kitchen that you throw into your cart at Ikea or Target.  For some reason, when I think whip,  I always scrape a little brain gum, stuck to the roof of my mind, from that 1980’s one-hit-wonder counter-culture band, “DEVO:”

Whisks, also known as “whips,” in the kitchen trade, are all about aeration and integration.

“That’s what I have a mixer for!” is probably cleverly rolling around the back of your noodle, when you think about whipping up anything, BUT, the whisk offers something that even the best on/off switch on a KitchenAid mixer can’t: Pressure, degree, and subtlety.

Whips/whisks are the manual mixers. They blend! They aerate! They emulsify! You can make mixer mayo, but aioli that is hand-whisked in small batches has a flavor that can’t be beat, and contributes a nice bump in calories burned to your Fitbit or iWatch!

True, the whisk attachment in a blender is great for things like meringues and whipped creams.

In a meringue, the whisk helps aerate the egg white, trap air bubbles in it, which causes it to rise. The beating also stiffens the proteins into forms that trap the air.

Likewise, in a whipped cream, the aeration combined with emulsification of the fats and water in the milk cause the cream to form and stand up.

Add some cinnamon to an egg wash? You love the whisk for distributing it evenly throughout.

Where is a whisk better than a mixer with a whisk attachment? Homemade mayonnaise is to the store-bought glop what a Wagyu beef burger is to a McDonald’s cheeseburger. It is a fragile, wonderful, hand-crafted thing that relies on simple, fresh ingredients and blows the mind.  One of the reasons that is so is because the hand-action of whisking requires delicacy and control.  You paint houses with a sprayer and an air compressor. You paint masterpieces with a brush and a palette.

Whisks give you control, and let you express yourself creatively in ways that machines just simply cannot. You can use an immersion blender/pimer in a pot, but it works at high speed and isn’t useful for medium to slow speed applications. You can under-crank a mixer or hand mixer, but both lack the ability to delicately control both the pressure applied and the variation of speed. This may not seem like a big deal, but some of the best stuff I’ve ever made, and even had at the top restaurants in the world, come from small batch whisking.

Why you should pay more at top eateries is because they treat your plate with that custom approach.You have an easier time achieving that level in your home kitchen because you don’t have 50-200 people a night to cook for. The whisk, then, should be no less important to your culinary creations than your knives as a go-to tool of personal expression.

Not surprisingly, all whisks are not created equal.

If you play golf, then you get it: You have clubs for distance, for chipping, and for finesse. Whisks are no different. There are different kinds that perform different tasks better.

Like clubs, home chefs who “get” whisks can go a little crazy buying them. They’ll convince themselves that this or that specialty whisk is the only way to get Recipe X to turn out. I’ve seen some whacky and wild whips, and, while they seem like a great idea when you’re at your favorite kitchen toy store, or shopping online, they clutter up storage space. No need to go overboard.  At the minimum, a good kitchen drawer should have three whisks/whips:

DO I NEED OTHER KINDS? I’ve seen a LOT of whacky whisks. Tornado. Adjustable, Balloon, funky wires, and artistic cubes. Wires with little silicon dots on the ends like the WMF Profi Plus, featured above. I won’t say that they never work, and there will be the odd home chef or two that swears by them, but I’ve found that, time and again, cooking and looking are not the same. Wire loops may be simple, but if they’re made well because they capitalize on the tensile strength of the wire which maxes at the loop.  Like all whip junkies, I’m susceptible to a good pitch, but something like a Profi would have to do more than a couple of things to occupy space in my already burgeoning drawers of kitchen toys.